Posted on 18th April 2017 at 08:19
It looked like everyone was Irish in Nottingham for the annual St Patrick’s day parade.
Nottingham would certainly not have been the most obvious destination for our forebears when looking for a place to settle.
Geographically it could hardly have been an easy place to reach, and, it seems that the industry of Nottingham was largely based on the Lacemarket, when looking back for over One Hundred Years, when the Irish were helping to populate Britain, so it was not an obvious choice for work. but it has always benefited from being very central and must, even so long ago, had a reputation for being welcoming.
So, Every year, on 17th March, no matter what day of the week it falls, Nottingham has always ‘pushed the boat out’ and the whole town is festooned in Green, especially the Market Square, which is taken over with a Stage and live music and dancing the whole day through.
In fact the Grand building of the City Hall, known as The Council House was opened up one year to welcome the ‘celebrants’ and all were offered free food and hospitality, the Nottingham Mounted Police even turn up with all their regalia to escort the parade.
This year it was the turn of the county of Fermanagh to be the Guests of Honour and they also proudly displayed the attractions of their Lakeland Scenery on a well presented stand.
McCrorys Removals Ltd usually do sponsor the parade, by, some years having a float, with Truck trailer and featuring the loudest amplified suitable Irish music, and also by displaying banners in the Market Stage area.
But, sometimes it can get a bit hectic. with all that merrymaking, so what better than to pop in to the local Tea Rooms for an afternoon tea and proudly present the Irish Arm of McCrorys Removals in Nottingham.
It should be noted that I dont normally wear any form of Jewellery or adornment, but sometimes one has to make an effort.
The reason for such a flamboyant watch, which was only borrowed for the day, is to conceal the frayed edges of the ‘sleeve’ tatoo!
Apparently the watch could even take Photos and Videos, and I imagine it can even tell the time. 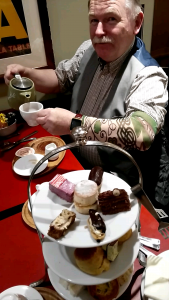