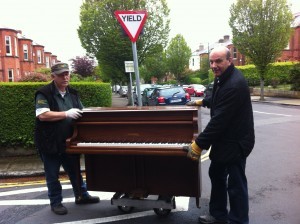 Posted on 18th August 2014 at 09:24
Moving house to Ireland is much the same as moving house anywhere, except, if you are moving from the UK to Ireland, you do have that extra distance, the ferry to think of, and it really is surprisingly different to live there in lots of ways too.
Especially moving to the Republic of Ireland, you will quickly notice that the Education System, Health Service, Government Departments, Taxation System etc are all uniquely Irish in style.
It helps that the English language is understood by everyone, but its still deceiving, how two countries that are so geographically close have developed in interestingly quirky ways.
Just one small example are the Irish road signs, many of which do not exist in exactly the same form or format anywhere else in the world.
Instead of the Give Way Sign that we may be used to in the UK, we must get used to being told to yield!
Its still the English language, but a more concise use of it… one word, instead of two!
Share this post: