National guild of Removers and Storers Ltd in court again

Posted on 27th December 2014 at 18:28
The So-Called National guild of removers and storers ltd in Court again
Tracy and Gary Tonks from A1 On The Move in Eastbourne were the latest furniture removal company to be taken to court by the national guild of removers and storers ltd, the so called Trade Association
At the hearing on Thursday Dec. 11th at Croydon County Court the Judge agreed to allow A1 Removals to amend their defence to include material that would show the courts that any inflated or invented amount claimed by the so called guild would be a penalty and therefore not be allowed.
But, because the so called guild barrister argued that they weren’t given enough time to prepare, even with seventeen days notice, the judge decided to adjourn the trial so as to allow A1 to amend their defence.
This will allow Gary and Tracy ample opportunity to amass plenty of evidence to demonstrate that the inflated figure that is being claimed to be the going rate for membership is more like £1,800 per year, if not less, and, certainly never had been over £5k per year, as being claimed.
So, although the delay is a nuisance, it will still have proven to have been another good day for justice.
The next case in the pipeline is at the High Court in London, whereby the so called guild of removers and storers are bringing a large group of removers, including McCrorys Removals Ltd, to court for a defamation claim and that hearing is to be held on 13th January and is an attempt to force the removers to provide evidence that would incriminate them, even though no such material exists, and no such claim will ever be shown to have had any merit.
It appears to have been an attempt at gagging the removal trade to stop the word getting out that the so called guild are Litigious. but the Judge’s comment at McCrorys Removals Ltd trial that the so called guild claim was‘wholly unmeritorious’ says enough about whether the so called guild are trying to use the courts to make vindictive and unwarranted claims, and awarding costs against the so called guild is comment enough, ….. fortunately a Judge cannot be sued for telling it like it is! 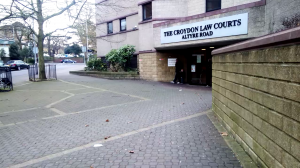